Komeer Featured in the News 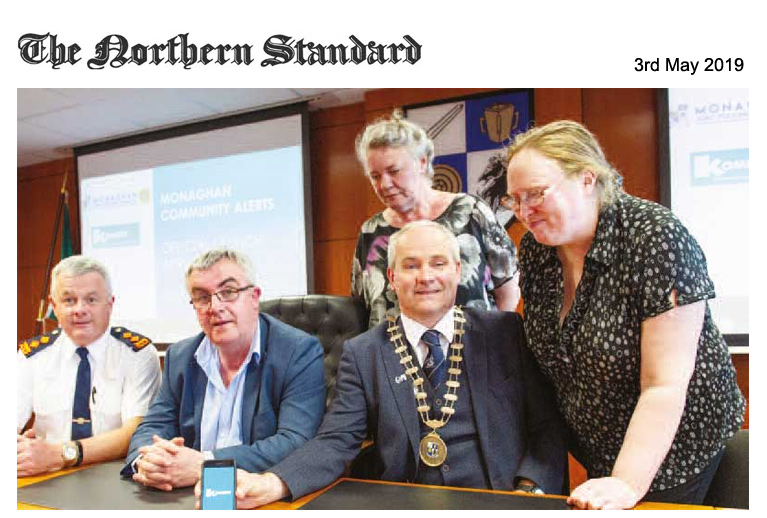 “Let the message go out here today, with the property marking that is in operation around the county and this new all county community alert scheme — Monaghan is fighting back against the scourge of thieves who bring misery to our communities,” Cathaoirleach of Monaghan County Council (MCC), David Maxwell, commented at the outset of the Monaghan Community Alerts launch last Thursday evening.

This Joint Policing Committee (JPC) initiative saw MCC, the Gardaí and the 26 Community Alert groups in the county come together to deliver an upgrade to the traditional text alert service. Monaghan Community Alerts is already up and running with 1,600 subscribers countywide. It is free to the public as MCC has underwritten the entire cost. 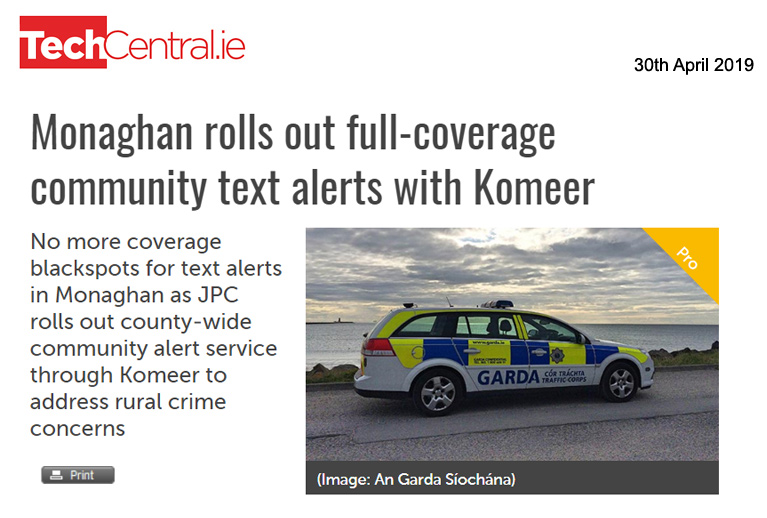 Monaghan is the first county to introduce full-coverage community text alerts with thanks to an innovative partnership between the community sector, An Garda Siochana and Monaghan County Council. It is facilitated by Komeer, Ireland’s first GDPR compliant complete communication service.

This comes after a four year collaboration between the JPC and Gardai in an effort to establish how best to support communities in addressing rural crime. 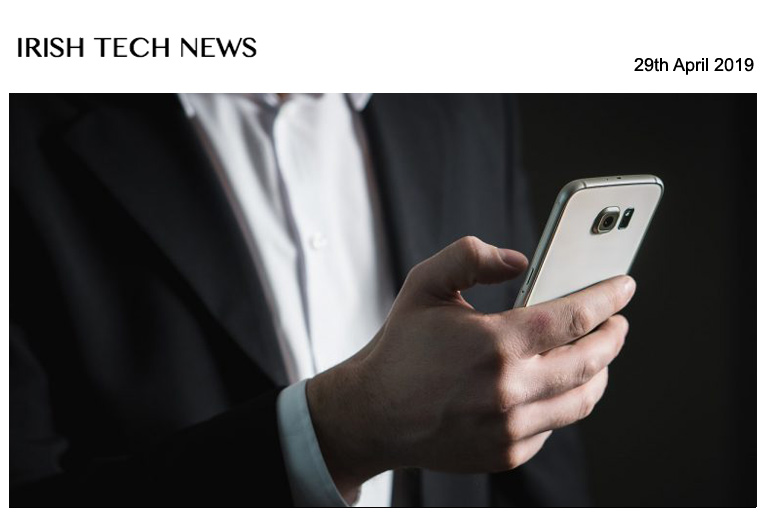 Co Monaghan has become the first county in Ireland to achieve full coverage by the Community Text Alert initiative, thanks to an innovative partnership between the community sector, An Garda Síochána and Monaghan County Council, and facilitated by Komeer.

The initiative will see all 26 local text alert groups operate under the one co-ordinated service for the first time, which will greatly simplify the task for Gardai when sending alerts out to the public. 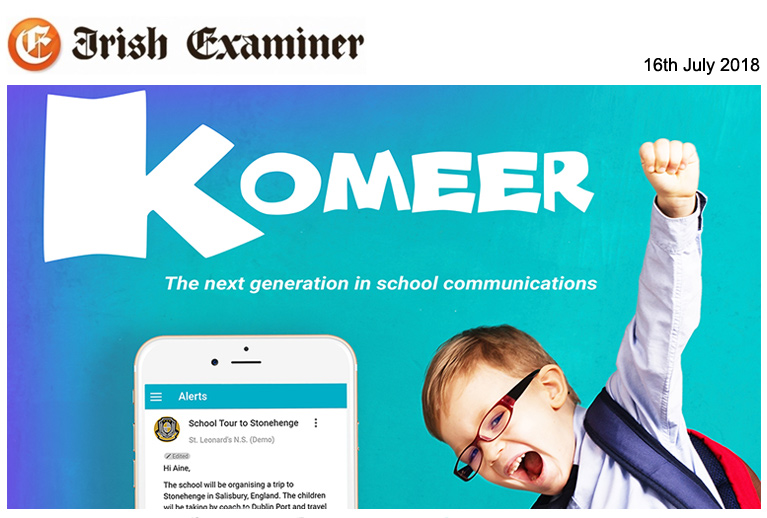 Communications between parents and schools can be time-consuming and frustrating. An Irish start-up is helping to make the process easier with a free, two-way app for schools, sports clubs and creches, writes Ruth Doris.

Komeer’s founder and CEO, Pat Walsh, claims the service can save schools up to €5,000 a year on text messaging and administration costs.

The entrepreneur, with 30 years’ experience in technology, property and services companies, has been involved in overseas development in Uganda, Ethiopia and India where he recognised the importance of rapid communications between groups. 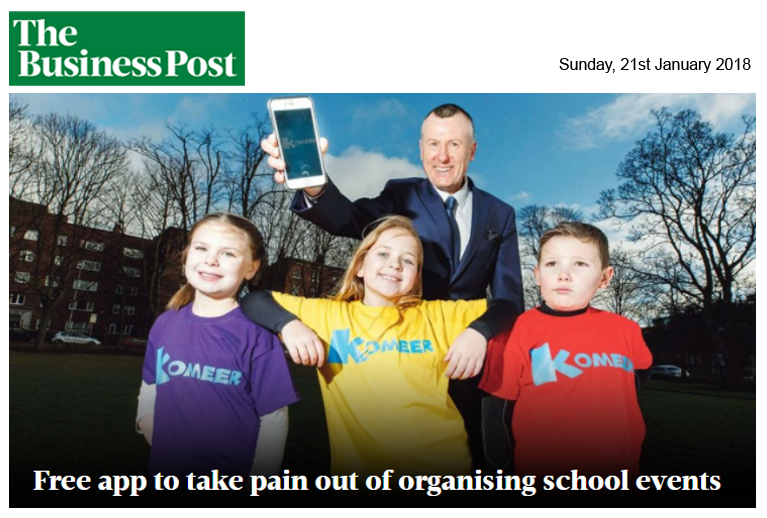 Dublin businessman Pat Walsh has launched a new smartphone app that he hopes will replace SMS messaging and printed notes as the go-to method of communication between teachers and parents in Irish schools.

Walsh has invested €120,000 in Komeer, a mobile two-way messaging service parents can download and use for free on iPhone, Android, Blackberry and Windows mobiles, using their email address to sign up via Facebook or Google.

Schools can also use the Komeer app for free to announce upcoming events and meetings, discuss security issues, or announce cases of head lice or chicken pox. Unlike SMS texting, Komeer alerts are not limited to 160 characters.

“They can create an unlimited number of groups – one for sports, one for each year, or class, and so on,” said Walsh, who has spent two-and-a-half years developing the app and testing the Beta version with 30 schools before its official release last week.

Komeer helps schools to keep parents in the loop

Our Start-up of the Week is Dublin-based Komeer, which has developed a low-cost mobile messaging service for schools and parents.

Komeer has already sent more than 1m alert messages this year on behalf of schools in Dublin, Cork, Mayo, Louth, Wexford and Laois.

‘So far, Komeer has sent over 1m alert messages for schools, including 50,000 during Storm Ophelia’
– PAT WALSH

A Komeer study revealed that more than 74pc of parents say schools are still choosing to communicate with them via a schoolbag note, to announce……. 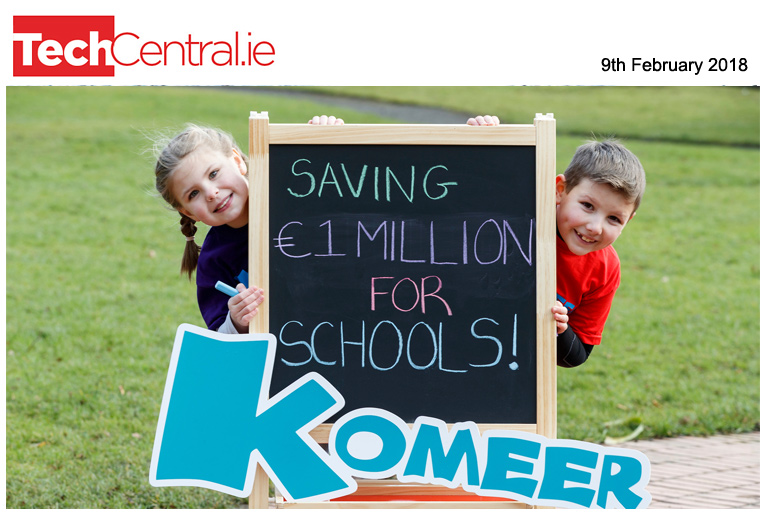 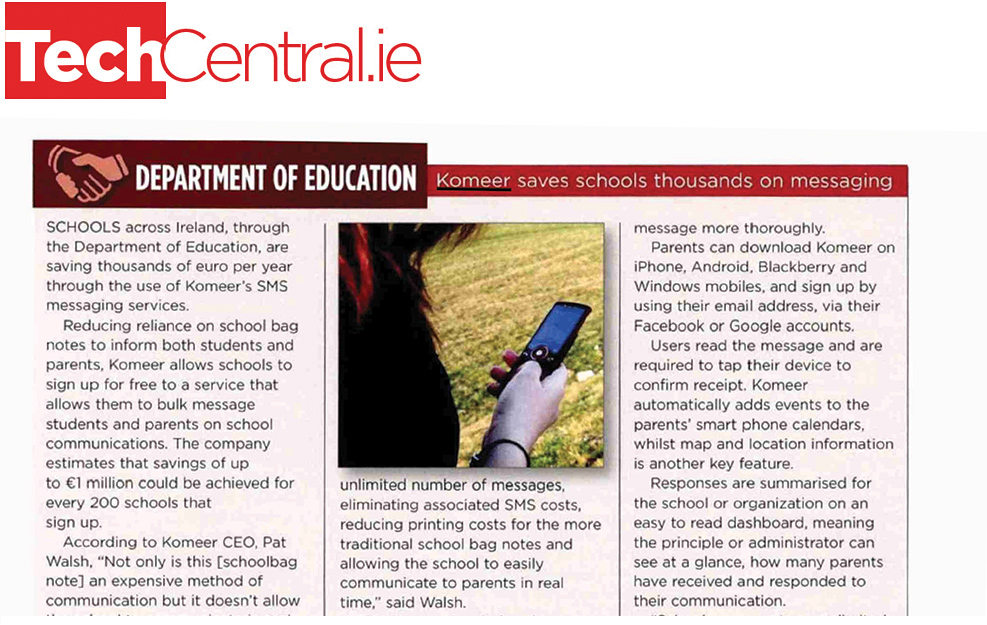 Schools across Ireland are signing up to use the new, free, mobile messaging service Komeer, which is saving each school using Komeer an average of €5,000 per year.

Komeer has already sent over one million alert messages this year on behalf of schools in Dublin, Cork, Mayo, Louth, Wexford and Laois.

This January, the app has reached a pivotal point in its business plan, announcing a new, free model that offers maximum savings to schools and the department of education in Ireland, with anticipated savings of up to 1 million euro, for every 200 schools that sign up.

A Komeer study revealed that over 74% of parents say schools are still choosing to communicate with them via a schoolbag note, to announce upcoming events and meetings, discuss security issues, and even cases of…… 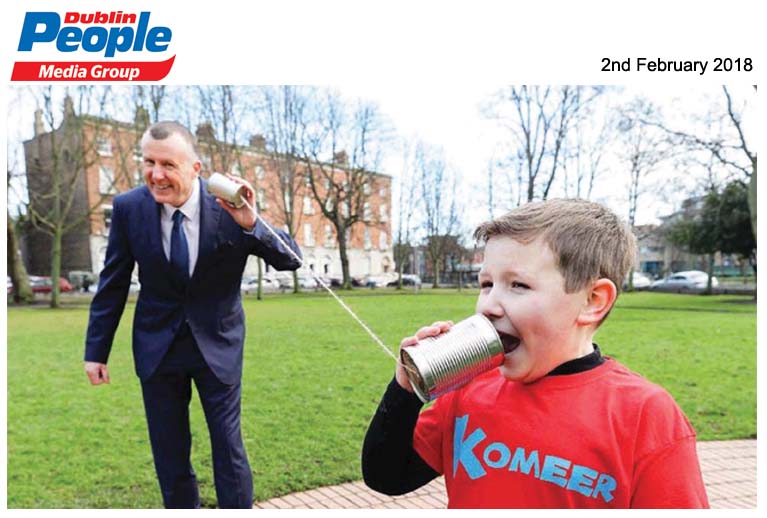 A YOUNG boy from Tyrrelstown in Dublin 15 was star of the day at the launch of a new app aimed at saving schools an average of €5,000 per year.

Darragh Barber (8) was on his best behaviour as he had some fun with CEO at Komeer, Pat Walsh, the man behind the new Dublin based start-up that’ saving the Department of Education over €1 million every year with its innovative app.

The Komeer app is a new mobile messaging service and already it has been used to send over one million alert messages this year on behalf of schools in Dublin, Cork, Mayo, Louth, Wexford and Laois.

This month the app reached a pivotal point in its business plan, by announcing a new, free model that offers maximum… 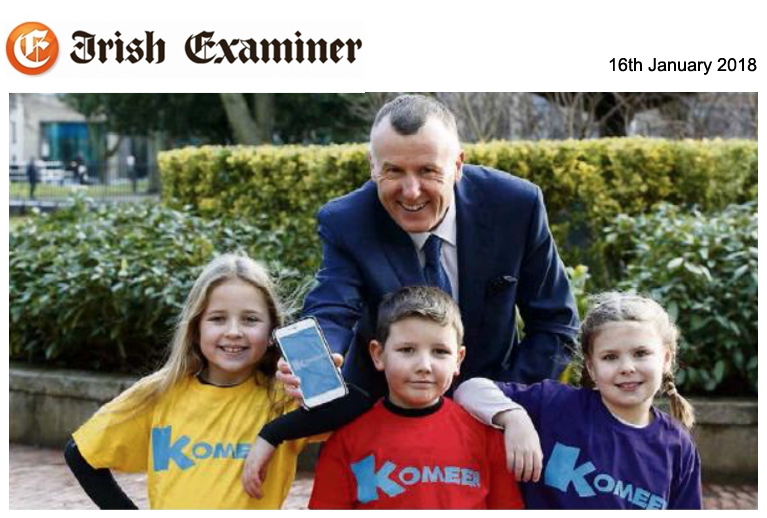 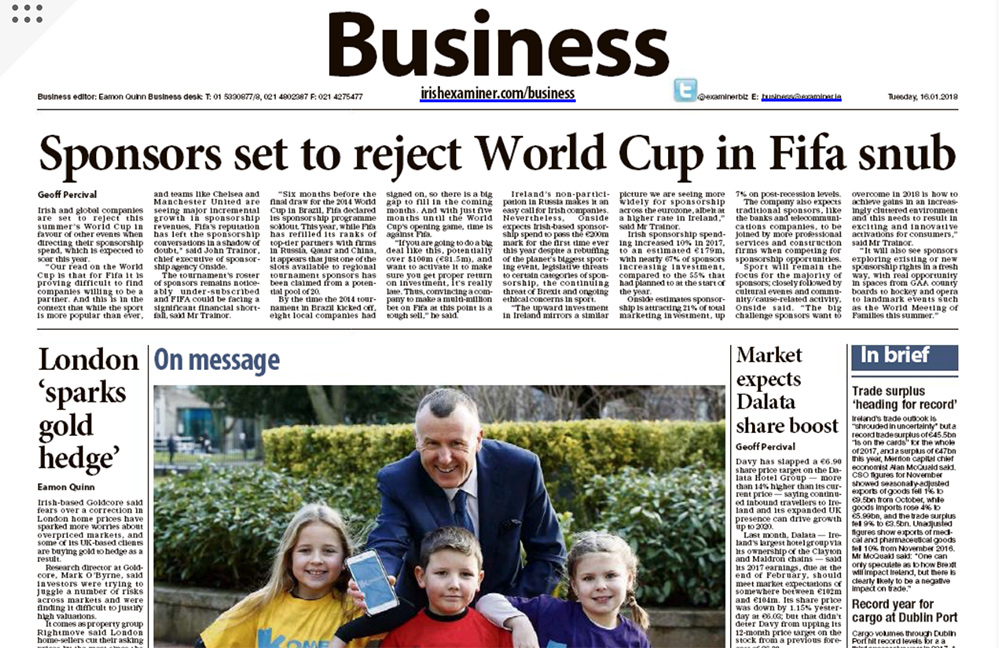 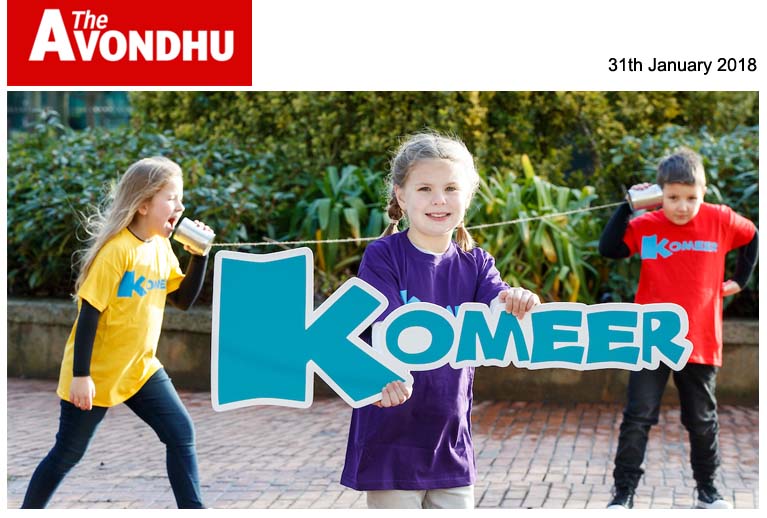 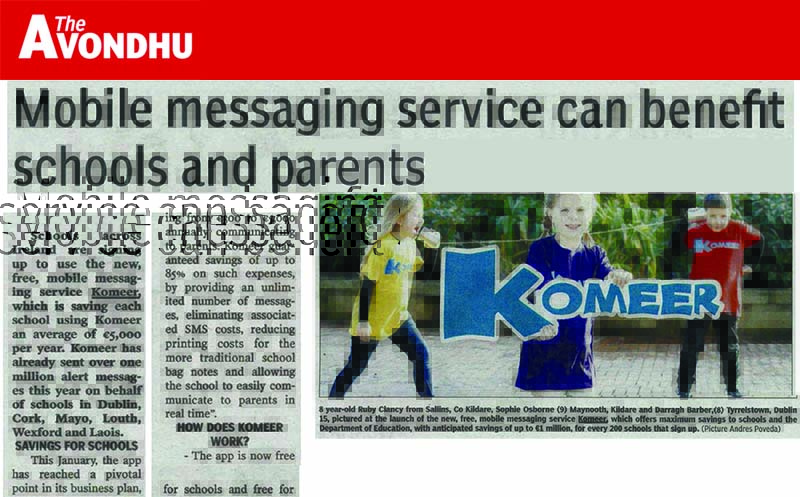 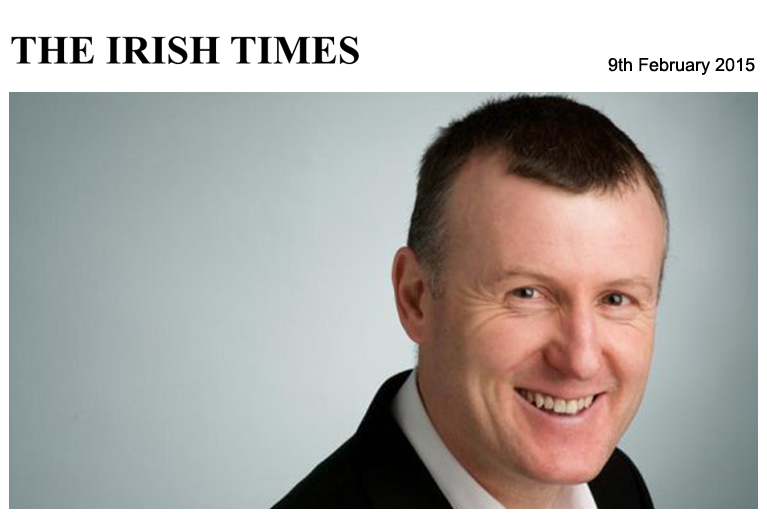 As anyone who has to communicate regularly with groups of people knows, it would be easier at times to herd chickens. But help may be at hand.

Komeer (a play on the words “come here”) is a new two-way global mobile messaging service developed by businessman Pat Walsh to take the hassle out of getting key pieces of information to groups of people.

Walsh juggles a number of different groups in his professional and personal life and was very aware of just how much time and effort goes into managing group communications.

In his role as a mentor for Clontarf GAA club, for example, he has to keep in touch with the parents of 70 boys involved in up to three training sessions a……